Are you surfing the web looking for a comparison of CBD isolate vs full spectrum CBD? Well if so, your search ends here. The CBD boom is attracting customers from all over the globe and there are many questions that prospective customers have before ingesting this herbal supplement.

In order to understand the difference between the different types of CBD extracts, you must first know what CBD actually is. For those that don’t know, CBD is simply a type of non-psychoactive cannabinoid that is typically derived from the marijuana plant. There are over 113 different cannabinoids, each of which provides specific benefits ranging from reducing arthritis pain to helping easing anxiety. Unlike THC, CBD is a cannabinoid that will not get you “high” and is primarily used to reduce stress, anxiety, sleep insomnia and pain from inflammation. 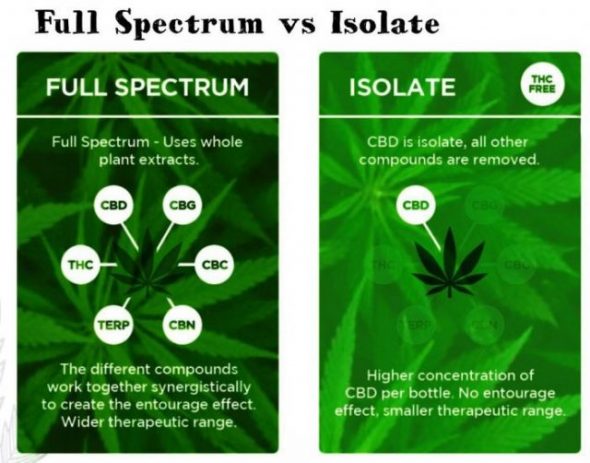 In this article, we will cover some of the most popular cannabinoids and what they’re known for from a medical-healing perspective.

CBD is a Type of Cannabinoid

To date, there are no reported deaths or cases of harmful side effects that were a result of taking CBD. It’s all natural, perfectly safe to use (for humans and dogs) and is now one of the most popular herbal supplements on the market.

Full Spectrum CBD or Isolate CBD can be obtained from a Marijuana plant in many ways and it all depends on the way CBD is extracted from a Marijuana plant. When certain extraction processes are used, the end result is pure CBD without any other cannabinoids or naturally derived chemicals. When this happens, you end up with what is known as isolate CBD. The word Isolate means something or someone that is alone and apart from others. So – when you

have an “isolate” product, this means you’re getting one single ingredient in most cases. When you buy CBD isolates from our store, you’re only getting pure CBD. We provide lab tests results and certificates of analysis on our lab results section of our website which we encourage shoppers to view.

Full spectrum CBD products contain all of the cannabinoids in the marijuana plant that was used for extraction. There are thousands of Marijuana strains and each one of them have unique combinations of cannabinoids that all provide a variety of different medical benefits. Some of the most popular cannabinoids can be found in a majority of Marijuana strains including CBDA, THCA, CBGA, CBD, CBG, CBCA, CBC, CBN, THCV and CBDV. We’ll go over 5 of the popular cannabinoids and what medical benefits they’re known to produce when taken.

CBDA: CBDA is often used to treat common nausea, vomiting and often used to reduce the side-effects of opioid use or chemotherapy. CBDA is usually found in most marijuana strains and is considered a cannabidiolic acid which turns into CBD when heated.

CBD: The FDA approved the first ever drug that was made with CBD to prevent seizures shortly after CNN released a documentary about CBD and the benefits it had with a child epilepsy case. The child who was suffering from severe epelyptic seizures showed drastic improvements in the number of total seizures after taking CBD. CBD is also widely used by many to help ease anxiety and stress, and it also helps to reduce inflammation from arthritis.

CBGA: Cannabigerolic acid is a precursor to 3 main cannabinoid lines, CBDA, THCA, and CBCA. It’s basically the father of THC and CBD and all it takes to change its form are some enzymes and heat. CBGA is known to help with inflammation and relieves pain in general by inhibiting the receptors that send pain signals to the brain.

CBG: Cannabigerolic is a “minor cannabinoid” and is known for its powerful effects on glaucoma patients. It’s been studied and successfully used as a vasodilator which helps blood vessels to widen in cases where more blood flow is needed. CBG is also being studied with successful results when used as an anticancer, antibacterial and neuroprotectant.

CBN: Cannabinol actually comes from THCA which breaks down over time and turns into CBN eventually. It’s been used in studies to delay the onset of symptoms that come from Lou Ghrig’s disease in mice and shows promise as a treatment for motor-nueral diseases.

Cannabinoids like the ones above are being researched and tested for medical purposes regularly around the world. As new updates and articles are released by credible sources, we will be publishing updates to our website to share the knowledge with the world about the positive medical benefits that cannabinoids are known to provide.

Shop With Confidence For CBD Extracts at CBD Goldline

Buying health supplements that aren’t regulated should be done with caution in general, not just with CBD supplements. Taking the time to research the company you’re intending on purchasing any supplements for highly recommended for your own safety. It only takes a few moments to do some research on companies’ reputation online using popular social media platforms and review sites.

Whether you’re buying CBD gummy bears or CBD dog treats, when you buy from us, you are buying from true CBD advocates that want to help provide a product that is going to truly help someone. Our CBD products are all tested by our staff personnel to ensure quality products are being sold. The products we sell are also accompanied by lab reports and certificates of analysis to show that the CBD products are pure and all natural.